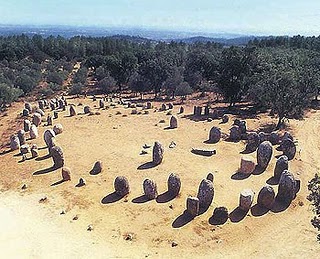 The Iberian cromlech of Almendres (Alentejo, Portugal) could be the original site where the confederation of Megalith Builders reunited, at the arrival of spring, when the Sun “defeated” the Moon.

The visibility of the celestial scene that the Megalith Builders contemplated to renew their kings –the simultaneous rising of Leo and Orion constellations– was the key reason that motivated a change of the ceremonial venue from Iberia to Great Britain.

Once the geographical, astronomical, and navigational knowledge was mature enough, the Megalith Builders decided to move the ceremony of monarchical renewal to higher latitudes to correct this deviation, and Avebury was the place they selected where to build a new venue.

Almedres could be, therefore, the original starting point of long maritime voyage that the princes of the Megalith Builders had to undergo before being crowned. This rite of passage would arrive through an oral tradition to Greece in the form of the myth of Jason and the Argonauts.